I arrived with my roll-y bags dragging behind me at the front door of Gruenberger Str. 1, in the neighborhood of Friedrichshain, in East Berlin, in former East Germany. That’d be the other side o’ the wall, kids. It was my first time in the city with daylight, having arrived the night before, and I’m not exactly sure what I expected, so I don’t really know if I was surprised to see the sky so dark and heavy and the architecture and streets so stern and cold. The front door to my new home already had luggage and canvases spilling around it, and I saw a very Swedish looking gentleman unloading a taxi. My roomie, Rudolf.

Gary, a former Takt resident, had decided a few years back to stay in Berlin. He goes back to London every so often to do a little work, but he always finds his way back to Berlin, and his sweet Julia. He let us in, with an unlit cigarette hanging out of his jaw, and welcomed us up the stairs with all our gear. 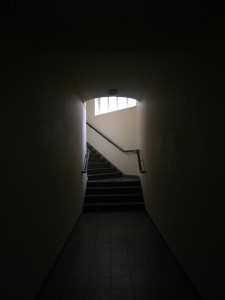 Upstairs, in our new home, Rudolf and I were introduced to Ron from Ohio, Chris from Atlanta, Roxanne, his girlfriend who was staying at another residency, Susana from Venezuela, Ryan from Toronto, and Ariel from France. Everyone looked about how I felt – a little tired, a little nervous, a little unsettled… but with Gary’s charming British accent, even more charming cigarette butt and hilarious anecdotes about Berlin, we were all around the kitchen table in no time, sharing our stories. We all agreed immediately that we were sure to be the best of friends. That we had lucked out. Apparently the last group did not get along, and I can’t imagine, in this small, shared environment full of creative personalities, how miserable that could have been. Johannes arrived not much later from the Netherlands, and that left one more who would arrive the following day – a wildcard we had yet to even know how much we would love. A few of us decided to follow Ryan to a pizza place and grab some lunch. Ryan had already been here about a month and we followed him down the street like a bunch of lost lemmings. The cliff is around here somewhere.

It went something like this…
“Ok, look at that! They call it pizza(!). Pizza. What are you having? I don’t know. Pizza I guess. Do you know THAT word. Oh! look, it’s part of that other pizza combination too, number 12, which looks like it might be pepperoni. Or ham. Spinaci? Do you suppose that means spinach? Maybe. Probably. OK, if I order a Classico, I wonder if that has cheese? I would guess it has cheese. But what kind of cheese do you think? Hey! I think that means salami! Oh! I’ll get salami! I don’t like salami on pizza. Gorgonzola. Yes – that’s what that one says. I think. What are you having? I think he wants us to order. I’ll have the spinachi, Oh, did I say that right? Spinakee…”

That went on, to the pizza maker’s delight, for about 15 minutes.
When we finally all settled on a pizza we could understand, our eyes fell to the beer case and BECK’S jumped out as the obvious choice, since it was a label we could wrap our heads around. So, pizza with spinaci and gorgonzola and a Beck’s = $4 euro. 4 people who haven’t slept in a couple of days who just met each other about an hour earlier who don’t speak German who are trying to order pizza and a beer? Priceless.

We returned to our quarters and began the process of unpacking. We all agreed immediately that our rooms felt like giant jail cells. Big, cold, sparse, and made completely of cement. A few began immediately to make it home – Ariel won the prize. Her studio looked in a matter of hours, like she had lived here for years. Mine remained empty. I kinda liked it. It felt like the clean slate I had come here for. Except for the score of finding a leftover rug in one of the common areas, I didn’t do much but slide my work table closer to the windows and call it sehr gut. (Note – I have been here a week and you can be sure my room no longer looks like the photo below.)

Our first night in our new home was a quiet one. We went downstairs to the Jågerklause, a heavy metal bar, that features live music from all over the world. We had a beer. We had a smoke. We had no idea how much we would come to loathe that place.

We called it a nacht.